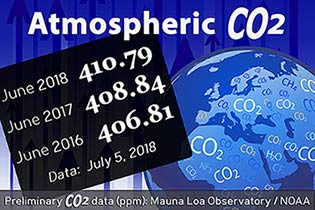 In Eaarth, Bill McKibbon depicts a changed planet. He describes dramatic changes taking place due to global warming. Even if a clear link to greenhouse gases is not 100% proven, the author stresses the need to recognize that our planet has changed:

The planet on which our civilization evolved no longer exists. The stability that produced that civilization has vanished; epic changes have begun…The earth we knew—the only earth that we ever knew—is gone.

Since 2014, the Intergovernmental Panel on Climate Change (IPCC) has insisted that global warming can be kept to within 2° Celsius, despite the fact that experts warn that its reliance on future technology before the fact is speculative science. We haven’t come near to developing the carbon sinks that the IPCC relies on for keeping within 2° C.

If you do the math, the current accumulation rate is 2.5ppm per year:

When the Keeling Curve of monthly CO2 is superimposed on average global temperature rise, the close correlation between rising carbon and rising temperatures is evident. What this means according to Renee Hetherington, is that we are living in a dangerous climate. Between 1970 to 2004, there already was an average 1-2° Celsius rise in temperatures in regions of Asia, Africa, southern Europe, and North America from the Pre-industrial age. These caused the impacts which McKibbon describes in Eaarth, serious impacts that began almost thirty years ago:

The day Jim Hansen announced that number was the day I knew we’d never again inhabit the planet I’d been born on, or anything close to it. Because we’re already past 350—-way past it. The planet has nearly 390ppm carbon dioxide in the atmosphere. We’re too high. Forget the grandkids; it turns out this was a problem for our parents…

Collectively, these changes are impacting the beginning and end of growing seasons, what farmers can grow, migratory paths for bird and moose, and the survivability of pandemics. Often the impacts are worse in already sensitive habitat, such as Alaska where the permafrost is wreaking havoc or the Southwest with its naturally arid climate.

Homo sapiens has altered the landscape and caused detrimental changes. In Living in a Dangerous Climate, Renee Hetherington contextualizes how human evolution, particularly after the Industrial Age, has induced climate change. Her book is interesting from the anthropological perspective, because step-by-step she lays out what all the available science is showing in present and future effects of temperature rise and carbon dioxide concentration levels.

Hetherington’s research shows critical changes occurring at temperature ranges of 1.0°-3.0° Celsius. For instance, at even 1° Celsius (1.8° Fahrenheit) change, crop yields will fall in Africa, and glaciers will melt in Peru. Those regions relying heavily on water reserves (such as aquifers) will be under stress. Water stress increases as the temperatures rise because more water is lost due to evapo-transpiration. Drought and flooding will further strain supply.

At 2° Celsius (3.6° Fahrenheit) up to 3 billion people will have trouble getting drinking water, and rising sea levels along with other climate catastrophes will force millions of people to migrate.

Beyond 2° Celsius, the situation is dire. For instance, 97% of coral reefs will likely die off due to ocean acidification, and there will be unrecoverable losses in native habitat and wetlands which hunters and farmers have long relied upon for hunting, fishing, and rice-farming.

According to global warming experts, that rise to 2°C correlates with 450 ppm CO2, but the window is wide open whether it happens sooner or later because of multiplying and residual factors. Hetherington writes:

To maintain atmospheric CO2 concentrations at 450 ppm, which would imply a warming of about 2° Celsius, we would have to reduce our emissions by about 90 percent by 2050.

Doing the math once again, if we make no changes, at the rate of 2.5 ppm increase of CO2 per year, by 2100 the carbon dioxide concentration in the atmosphere will likely be:

That is “the insanely optimistic” version of global warming meltdown scenarios. It can in fact be much worse. Eaarth:

[I]f you took every government pledge made during the [Copenhagen] conference and added it all together, the world in 2100 would have more than 725 ppm CO2, or slightly double what scientists now believe is the maximum safe level of 350.—Bill McKibbon, founder 350.org

The much-worse scenario is due to the fact that many countries are trying their level best to catch up with the United States in enjoying the fossil-fuel lifestyle. The dangers compound and complicate the rate of carbon accumulation when the sum of all possible effects create their own positive feedback loops.

There is the danger in reaching a slippery slope of no-return, where global warming is no longer controllable, and all we can do is try to manage its symptoms. That scenario is in fact the subject of the book Climageddon by Lawrence Wollersheim. The author pulls no punches when it comes to describing each of the known possible global warming consequences and how it will affect our lives, destabilizing the climate as well as human and biological systems.

Wollersheim emphasizes that the consequences of global warming are interconnected and interdependent in ways that scientists have been either been discouraged from studying or unwilling to study. However Wollersheim’s detailed metasystemic research provides the lay reader a unique key-code comprehension of the climate emergency. There are also charts and illustrations depicting degrees of climate destabilization in Part 1, while Part 2 focuses on remediation strategies. Wollersheim writes:

It is possible we may soon tip the climate into a new, fairly stable equilibrium quite unlike the 12,000-year Ice Age cycles we have been experiencing for hundreds of thousands of years. The very bad news is that billions of humans could soon be suffering and dying because this climate destabilization will also destabilize our global financial, political, agricultural, and social systems.

Popular climate-change authors emphasize that there must be action combined with hope. Even though twenty-six years has passed since the 1992 United Nations Framework Convention on Climate Change (UNFCCC) was established, there has been signatory progress in negotiations and voluntary agreements. But all activists agree that action since the adoption of the 1997 Kyoto Protocol has been too slow.

As for optimism, 350.org founder Bill McKibbon is praying we will have a “soft-landing” such as when pilots Chesley Sullenberger and Jeffrey Skiles glided the plane to a ditching in the Hudson River for US Airways Flight 1549 in 2009. Dr. Hetherington believes we need to invest and strengthen our available local investments. And Larry Wollersheim believes Job One for Humanity is the clarion call for collective adaptation:

What’s positive is the potential innovation, cooperation, and community building we will have to develop in order to overcome these unfolding disasters. This will, when achieved, directly expand our evolutionary maturity as a global society.

It will indeed take all that humanity has to overcome the present predilection at a time when (despite the proclamation of a new gilded age for oil) the resources in petroleum have already reached their easiest accessible peak.