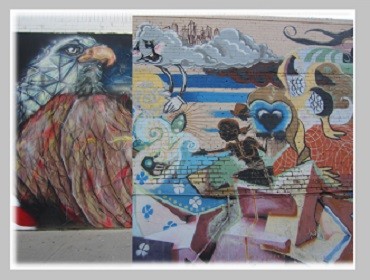 ….a Bernie Sanders candidacy is an invitation to do again what’s been done in 1984, 1988, 1992, 2000, 2004 and 2008. Bernie’s candidacy is a blast toward the past, an invitation to herd and be herded like sheep back into the Democratic fold, to fundraise and canvass and recruit and mobilize for Bernie, as he warms up the crowd for Hillary. Bernie is a sheepdog…

But Ralph Nader, thrice Green Party Presidential nominee who once wrote that third parties are not spoilers, published an open letter in August 2015 offering support for Mr. Sanders, reneging on his own 2016 Green Party US candidates.

Green Party members vary from more radical to more mainstream, but here is a quick list of substantive differences:

The mainstream media purposely provides no coverage on third parties. The most common excuse is that “well, they can’t possibly win anyway.”

This really puts the cart before the horse, especially for a country whose earliest origins and cultures were powered by local community organizing, with townspeople contributing to support grassroots political organizers.

Third parties, including Socialists, play a vital role in exposing the cracks in the system. We are far from having a genuine kind of democracy if duopolistic blogs like Daily Kos ban third party coverage and when third platform candidates cannot even participate in nationwide televised debates.

Since the the Citizens United U.S. Supreme Court ruling, campaign fundraisers are synonymous with exchequer for huge corporate donation slush funds. Even Senator Bernie Sanders gearing up for a democratic match against former Senator Hillary Clinton is increasingly pursuing the club SuperPAC route.

Broadcasters deliberately fawn over candidates based on financial backing as if that equates with credibility. For the Clintons in particular, with the establishment of the Clinton Foundation, the dark days of Whitewater are a distant thing of the past, so much money has been raised. For Mr. Sanders, such backing will demand reciprocity in the form of Cabinet appointments.

In contrast, the Green Party democracy rejects all corporate sponsorship:

The Greens/Green Party USA is supported entirely by memberships and small donations. We receive no corporate or foundation money.

Their philosophy is inclusionary: if more people became involved daily in political dialogue, in contributing ideas as well as monetary support, we would soon develop a more person-focused agenda with solid citizen feedback and genuine problem-solving approaches on the most pressing complex ecological, social justice, and resource depletion issues facing the global 21st century.

Alternative media analysts have repeatedly brought up the fact that post-recession gains have been meager. Whether or not the price of gas is lower or cost of living increases remain on par with salary increases, the middle class continues to shrink. Common-sense should inform us that a huge Pacific Rim trade pact guarantees more, not less, of the same because of the incentives for moving production and white-collar jobs overseas.

Yet regardless of which Congresspersons read the documents, they remain bound by an oath of silence. Thus, no politician talks about the Trans-Pacific Pact, even it it is the elephant in the room. That includes Senator Bernie Sanders, although he has opposed NAFTA and now opposes the TPP.

In contrast, by definition the Green Party is against the Trans-Pacific Pact:

The Green Party of the United States has opposed the TPP, as well as the Transatlantic Trade and Investment Partnership (TTIP), ever since plans for these international trade agreements were reported. Greens sharply criticized President Obama’s attempts to keep the text of the TPP secret from Congress and the public, while inviting 600 “trade advisers” from powerful multinational corporations to review drafts. The Green Party joined numerous unions, environmental organizations, and public interest groups in warning that the TPP will outsource jobs, lower labour standards, hurt small businesses and family farms, and override environmental, food safety, and public health protections.

While the Green Party of California courted the possibility of Sanders running for the Greens, the World Socialists voice the opinion that Green-like Democrat Bernie Sanders is merely a decoy who is quite far from a genuine socialist:

Many commentators at the website seem to agree that Sanders may be more of a warmongering “wolf dressed in sheep’s clothing” than innocuous “sheepdog.”