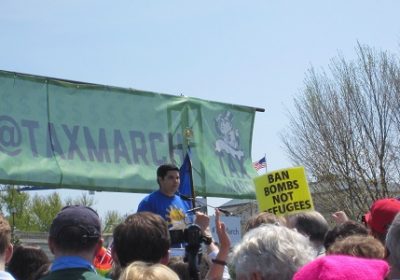 Partners from 350.org and Rise Up May 1st tell us why more marches and community actions are necessary to build solidarity

On a sunny Saturday April 15th, thousands of people gathered at the National Mall for the 2017 April 15th Tax March. The protest began at noon at the U.S. Capitol West Front Fountain. According to TaxMarch.org, the theme this year highlights President Trump’s conflicts of interest, his foreign entanglements, and whether he even pays any taxes at all.

For the past 44 years, going back to the Nixon Presidency, U.S. Presidents have made their tax filings available for public review. Even if it is merely a formality, transparency and accountability is the foundation for winning the people’s trust. America no longer a fair country for the poor

Demonstrators in 45 other states and many cities nationwide, as well as in four other countries (Japan, UK, Germany, New Zealand) today signaled their anger and frustration in low-key, artful ways. Sisters of faith believe in tax justice, too

Senator Wyden, who could have been in Oregon, spoke about the challenges facing this country in the Tax Review Committee and evident differences in tax rates between the fortunate few and the average American workers.

“Political change doesn’t start in government office buildings, it starts from the bottom up.” Heather McGee of Demos voiced important questions, such as “Who is Donald Trump working for?” Could it be defense contractors?

Tax-dodging by the super-rich is costing the tax-payers in cuts to public schools, cuts to the Environmental Protection Agency (EPA), and cuts to block grants that help pay for Sesame Street and Meals on Wheels. “We have no kings here; we have no slaves here!” he cried out in a rhetorical analogy with the King George III of England. No one in a democracy is above the law, Raskin asserted using quotes by Thomas Paine and citing Article 1, Section 9. Could citizens have a new disincentive for filing taxes in the form of the Trump role model? Why not admire those we are expected to look up to by following their habits and mannerisms to the fullest, including evading taxes and shirking responsibilities to low-wage workers?

However, the Trump Administration has already made it clear that those in the bottom rungs of society will be made to pay for the lavish excesses of those whose lifestyles would be inconvenienced by helping pay for public services. The clampdown on immigrants has negatively impacted immigrant communities according to the Committee Against Anti-Asian Violence (CAAAV). Whether due to immigration enforcement, denial of entry, or being held at routine checkpoints upon return, immigrants are being advised on their rights, legal counsel, and how to make emergency plans. Boldly going where no one else dares

In other words, while President Trump regards entry level immigrants of color as a disposable liability, in contrast he supports tax cuts for the uber-riche who are masters at tax evasion, commit corporate fraud on a massive scale, and scam their customers or the government out of millions of dollars.

Lisa Gilbert, V.P. of Legislative Affairs at Public Citizen, spoke out on probable foreign entanglements and corporate interests as reasons why Trump is afraid to release his tax returns. But why does this President also have his son-in-law and daughter working in the White House, and why are there billionaires serving on the cabinet?

According to the National War Tax Resistance Coordinating Committee, tax evaders should not be confused with war tax-resisters. The billionaire tax-evaders are not pricked by their consciences so much as obsessed with increasing their profit margins. In contrast, tax-resisters opt either not to file or pay partial taxes as citizens of conscience who support, for instance, demilitarization. War tax-resisters are often ordinary citizens who live simple lifestyles, the most famous of whom was philosopher Henry David Thoreau, who went to jail for refusing to pay his taxes. “Trump’s missing taxes are a direct line to missing girls” she asserted in reference to debt-ridden trafficked women and girls who end up working in underpaid or abusive conditions as sex-workers—such as near the casino-resorts that Trump owns. Tamika Mallory and Bob Bland “The people united will never be defeated!”

Other activists shared their stories of resistance, pointing out that if they did not have a tragic backstory they would not have migrated to the United States, where they often work in jobs below minimum wage, suffer routine detention, and still must file tax returns.

Whether it is Esther Chang or Antonia Pena or Priscilla Evans, these workers would agree that the environment of exploitation and abuse is worsening under the new administration. Employers withholding wages, encouraging the use of trafficked persons, and threatening deportation at any time qualify as abusive. In fact, Mee Moua, president and director at Asian Americans Advancing Justice, stated that “in the ten days immediately following the election, nearly 900 incidents of hate were reported around the country, including reports that were clearly anti-Muslim, anti-Asian, and anti-immigrant.” Working class citizens made good use of a day of leisure

“This is not a normal presidency. We must not allow it to be normalized” quoted David Sanchez, Science March organizer

However the seriousness of the protest was offset by colorful posters, upbeat music, and even inflatable chicken-floats satirizing how afraid Trump is to release his returns. A stand-up comic, who did indeed look and sound like the President, even delivered lots of incredible one-word-lines. Couple of volunteers with a march banner

For many present, however, the climax came when Congresswoman Maxine Waters of California described the Trump Tax Plan, which will provide the biggest tax cuts for those making over one million dollars per year. How could we know what Donald Trump is paying if he doesn’t release any tax returns? Waters’ proposal would force the President to release returns from at least the past three years, reminiscent of how President Nixon was forced to release several years worth of tax returns during the Watergate investigations. She alluded to the fact that decent rural citizens who voted for Trump are becoming disappointed. Bishop Dwayne Royster closed off the event with remarks about whose country is it. In fact, this event proved that at least a determined segment of the population still believe that we are the ones who truly own and pay for the government, and not the other way around.

“It is our country, whether we are Christian, Islam, Jewish, Buddhist, black or brown…” Many volunteers wearing Tax March green tee-shirts helped welcome the protesters and visitors to the event.