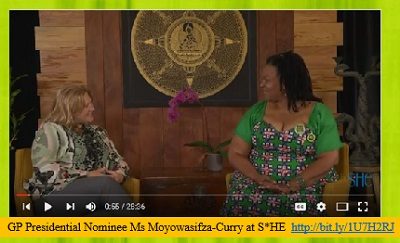 As of early June, AGN noted that most of the mainstream news stations, especially Fox News, devote disproportional 2016 Presidential race campaign coverage based on size of candidate financing. Those with the deepest pockets get the most time. The breakdown is about 60% time spent talking about Donald Trump, the Republican nominee; 30% talking about Hillary Clinton as the “presumptive Democratic nominee“; and only 10% of the time spent on Bernie Sanders.

Clearly under corporate personhood, money talks. Absent Bernie Sanders and none of the top candidates remain to discuss campaign finance reform or the TPP. Too many in the mainstream media also deliberately perpetuated the myth that Sanders is a “Socialist” in what increasingly appears to be a rigged election by the Republican-Democrat duopoly of the United States.

Socialism today is the code word for “enemy of industrial civilization”, against all of Capitalism’s attending goods: more mergers, more military industrial complex, more wars, more prisons, and more wage enslavement. Never mind that at least 40% of voters are now identifying as Independent.

Communism, of course, with its emphasis on universality of the human experience, common values, sharing, cooperation, and consensus is the pinnacle of taboo. It justifies the U.S. new military intervention in Asia: to bring about more favorable first-nations market democracy.

The extent to which the Wall Street establishment’s tentacles are strangling free party elections is evident in how the media avoids discussing the big economic concerns in election 2016—suggesting how Wall Street, the mainstream media, and politics operate in concert.

Issues such as personal debt, underemployment, homelessness, and new wars, touching the lives of millions of citizens are not part of big media dialogue. Cable TV won’t explain why Trump is demagogue, or how the Clintons stay so wealthy. Demagoguery and cult of personality are cheap fodder for the panelists at Fox News, CNN, and MSNBC. These overpaid pundits no longer have to bother with facts, since programmers only want to expose us to mindless tongue-clucking and endless chatter built exclusively around “who said what to who about whom.”

All candidates deserve equal say in a real democracy, but the mainstream broadcasting repetition envisions making fools out of us in repeating gossip or being able to spit out only two names.

Here’s a rundown of several of the many undercovered candidates which AGN would endorse. Bear in mind these candidates may be running under any party banner, but the fact that they receive very little funding or support either from the public or two major parties makes them par independent. It takes guts and brawn to run alone, but their fervor indicates commitment, aside from the fact that they bring good ideas and perspectives out into the open through a platform.

2016 presidential candidates emerge from all walks of life but many are relegated to invisibility due to the exploitative nature of media. In order to sell more corporate products and raise profit margins, the elite implicitly desires more dysfunctionalism, thuggish individualism, and greater social strife (with commensurately less cooperation, sharing, and spontaneous community spirit).

Many candidates are presenting innovative proposals, but the mainstream media cherishes only name-brand recognition in exchange for advertising revenue. We either opt for an intellectually alert and awakened public, with brave candidates stepping forth to speak out on issues which they have expertise in, or move along the paths blazed by hypnotic media and zombified leaders.